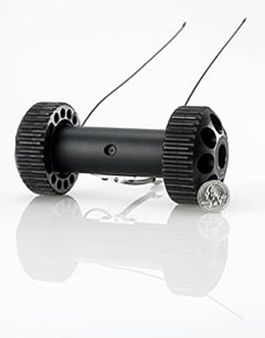 Start with something the size of a beer can. Put a wheel on each end, and a TV camera inside, peering out. Pack in a lot of electronics, motors, and batteries. Make the unit able to survive repeated 30-foot drops, but keep the weight to just over a pound. Provide a separate, hand-held controller with a joystick to drive the unit, and a TV screen to show the user what the unit sees.

The result is a surveillance robot called the “Recon Scout,” which the FCC recently authorized under a waiver.

The U.S. military has been using the device in Iraq and Afghanistan for a few years now. Before entering a building, troops can toss a Scout into an upper-story window and steer it down the stairs and through the rooms to detect hostile persons and size up their armament.

With the FCC waiver in hand, U.S. police and fire departments, and security personnel in critical infrastructure industries, will have access to the same technology. Typical applications are likely to include checking a building prior to forced entry, locating hostages and hostiles before a rescue attempt, searching for survivors in a burning building, and inspecting the site of a chemical or nuclear release. A police task force told the FCC, after testing the Recon Scout, “We don’t feel comfortable without this thing now.”

The manufacturer faced a problem, one increasingly common for new radio-based technologies. The product was plainly in the public interest – no one disputed that it could save lives – but there was no place for it in the FCC’s spectrum allocations.   True, the robot came with constraints. For one, it needs frequencies below about 500 MHz to achieve adequate penetration of building walls, at power levels sustainable by batteries in a one-pound device. For another, it requires analog modulation, even at the cost of more radio bandwidth. Digital TV transmission cuts off abruptly if the robot ventures too far, making it impossible for the operator to drive it back into range.

The military version of the Recon Scout, which is not subject to FCC oversight, operates in the 420-450 MHz band. Domestically, that band is allocated primarily for military radar, and secondarily for amateur use. With nowhere else in the spectrum to go, the manufacturer asked the FCC to waive its spectrum usage rules to allow operation in that same band.

Several police and fire departments supported the waiver. A number of amateur radio operators opposed it. Also weighing in, as is usual in such proceedings, was the National Telecommunications and Information Administration (NTIA), which administers spectrum for the federal government, including the military. NTIA warned that it did not want to see mass-marketed consumer devices in a military radar band. But it acknowledged that law enforcement and firefighting agencies could benefit from the Recon Scout. On that basis it signed off, except for operation within 30 km of five specified radar sites.

The FCC likewise signed off, adopting NTIA’s restrictions and adding conditions of its own, including limits on sales numbers for the first two years.   Police and fire personnel around the country will feel a little safer.